We’ve been doing ninja for two years and I’ve seen so much improvement in my Ninja Mears. If you’ve been following along with our ninjadventures on Instagram, then you’ve seen him grow more than a foot in that time! But aside from the obvious physical growth, he’s developed character and perseverance well beyond what I imagined. So that’s why today, I’m going to tell a ninja story that comes from my heart, one parent to another.

First, let me tell you a little about Ninja.

Ninja sports is the hottest growing sport around! For the unfamiliar, you can start with Why We Chose NinjaZone. But the gist is  “To move uninterrupted through an environment or series of obstacles with fluidity, prowess, and stealth. To use combinations of skillful spins, rolls, flips, jumps, and kicks to elude an opponent.”​ It’s part martial arts, part gymnastics, part parkour, and much more wrapped into an hour of fun.

The curriculum teaches confidence, self-control, and team building. All crucial aspects of a well-rounded individual. But in addition, NinjaZone offers five levels based on the skills they attain: White, Yellow, Green, Blue, and Purple.

Students start in White level, grouped according to age. Ninjas must master a set of skills before they can be invited to a Mission Ceremony, where there skills are tested. This is where our Ninja story really begins.

Waiting to be a Yellow Ninja

Originally, we were told about the Mission ceremony in February. Mears had worked hard all winter and was ready to try for Yellow Ninja. Then the Coronavirus shut down stopped everything. He was disappointed, but stayed active and tried to work on his skills at home. But he was eager to get back in the gym. In July, we made our triumphant comeback to NinjaZone Academy and it took a few weeks to shake off the cobwebs. But Mears coach reminded him where he had been and where he needed to go and it put his training in high gear.

Soon, he wanted to go to to the park to practice his skills. He worked on them at home–inside and out. He used all his ninja techniques to get his mind focused for each session at the gym. By early August, he earned his ticket.

It was at the end of class, and the Coach passed out invites to the qualifying ninjas and my ninja waited patiently, but also nervously. But he didn’t have to wait long because he got his invite for the White Level Mission Ceremony for the very next weekend. He was elated, but also nervous. He wasn’t sure he was prepared, and neither was I. But he had been invited so he wanted to try and some days, that’s all you can ask for.

So, we signed him up for his mission and he worked extra hard on his training, using every couch and surface. Kicking and spinning in the backyard. Practicing gargoyle hangs on every available bar. He worked everyday afterschool, and extra hard in class the night before. The day of the ceremony arrived.

It’s this point of the story that I must say, I was a wreck. I knew he could do it, but there was a lot of pressure. Even though you have to be invited, the coaches warn that not every ninja may pass. The thought of Mears putting in all that work to not achieve his biggest 2020 goal, broke my heart.

Mears on the other hand, was fine. He wanted a “good, healthy breakfast” and even went outside to practice some moves before we left. I asked him if he was nervous, but he shrugged and said “Maybe a little.”

So we all piled into the van and headed to the ceremony. Since we’re in the age of COVID, there are precautions in the gym. So we hung out outside and took turns taking pictures. We were all most concerned about a skill called the Gargoyle Hang, where you hang upside down, tucked into a ball, supporting all your weight with your arms. We practiced this skill over and over again, but it’s a tough one.

Each student is called up to do the required skill and the coaches rate them. We watched him go through each skill and it appeared he was doing well, but we wouldn’t know until the end when the coaches tallied the scores. He held tough through the whole test, nearly an hour. While the judges calculated their scores, the ninjas waited patiently in their spots listening to Coach Zach.

Now it was time for the ceremony. Names started to be called and newly minted yellow ninjas ran off to their spots with their brand new shirts. More than halfway through, Mears name was added to the list of Yellow Ninjas. He hesitated before he ran up there, and then with the biggest grin, took his shirt back to his spot.

For the next few weeks it was all he could talk about–to anyone and everyone, even on a class Zoom. He was a Yellow Level Ninja. He’d done it.

Mears loves to show off his new Yellow Ninja Uniform and he is often congratulated. While happy for him and for his Mission Ceremony achievement, I’m most proud of his effort. He wanted it, he worked for it, and he earned it. It’s a proud moment for a parent to see their kid make a goal and achieve it. There will be a day when he will no longer kick, spin, and flip, but the effort, perseverance, and willingness to try are qualities he neede the rest of his life.

So that is why this Ninja Story is so near and dear to my heart.

Thank you to NinjaZone Academy for your support of Indy with Kids. While all of the above thoughts, opinions, and stories are my own, I received a complimentary lesson for this sponsored post. Read more about my son’s NinjaZone journey here. 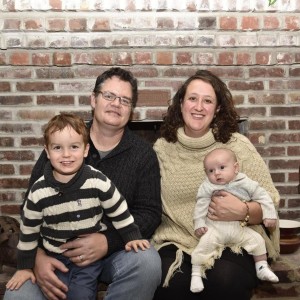 Hi, I'm Tori. I'm the managing editor at Indy With Kids, but probably more well-known as the lady that had a baby in the driveway. I'm a boy mama of three and, along with my husband Chad, we love to share the best parts of Indiana to our boys and readers. I love new fonts and the Oxford Comma, and am hopelessly addicted to houseplants and coffee.
All Posts

25 March Madness Activities for Your Family

Things to do in Carmel