As a special needs parent, it’s easy to get down on the world. But then you meet someone like Spencer Hahn and learn about “his museum”, and you can’t help but feel uplifted.

You see, Spencer was born with serious brain damage due to a stroke he suffered in utero. His mom, Erica, was given a grim prognosis and a lot of “nevers.” He would never walk, they said. He would never talk. He would never be potty trained. Along with a diagnosis of cerebral palsy, they later added mitochondrial disorder, seizures, Factor V Blood clotting disorder and autism. As a single mother, Erica didn’t have the financial means to facilitate expensive therapies. What she did have was a membership to Indy’s Children’s Museum.

Now, we all know how great Indy’s children’s museum is. We’ve seen parenting magazines all over the country list it as one of the top in the nation. Most of us have taken our kids there to play more times than we can count, but what we don’t always see is how this museum is making a difference in children’s lives on a daily basis. We sometimes miss the subtle ways they work to make sure every exhibit and experience is inclusive for all kids. We don’t notice how much the employees care about each and every little visitor.

None of this was lost on the Hahns. Erica started brining Spencer to The Children’s Museum when he was just 6 months old. Pushing him around in a stroller, she would talk to him and teach him sign language for the things they saw, all the while, he was getting used to crowds and noises. Therapists would work with him to practice crawling in the padded area of Playscape and they worked on oral motor exercises by making funny faces in the mirrors on the 4th floor. The museum was his therapy center and they used every inch of it. It’s where Spencer said his first words and where he took his first steps. They continued to visit the museum almost every weekend over the next 9 years. The Children’s Museum of Indianapolis became his safe place, but also a place where he would learn so many valuable skills.

At the end of each day, Rex, The Children’s Museum’s friendly dinosaur mascot, leads children from the 4th floor, down the ramp to the lobby in a fun parade. As his mom would say, “His museum is a place that ends every day with a parade and in so doing, has taught Spencer that no matter the challenges the day has brought we should all smile and wave good-bye to our friends.”

It’s these end-of-the-day parades that provide the landscape for his next milestone. They are the highlight of Spencer’s visits and for a child who was never supposed to walk, is a huge deal. Spencer has led the parade with Rex and his museum friends more than 170 times and is close to achieving his goal of 200 Parades.

Along with his mother, we at Indy with Kids would like to invite you to celebrate the 200th Parade milestone with Spencer, which is set for December 8, just one day after his 10th birthday. Wouldn’t it be great if we could line the parade route to cheer him on? What if we all brought signs to show our support for this little hero?

To participate in the 200th parade (or any parade) with Spencer, meet on the 4th floor between the elevators and the carousel around 4:30-4:45. For more information or to follow Spencer’s #200Parades you can also find them on Facebook and Instagram.

If you can’t attend a parade, this cool little dude has also started a fundraising campaign to provide resources and awareness for other children with disabilities who are visiting the museum. Because, as his mother says, “without our museum Spencer would not be where he is or, more importantly, what he will become.” Keep an eye on the Children’s Museum website for more details. 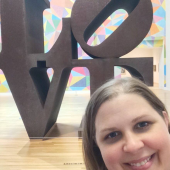 Rebeca Simpson Holloway has been writing professionally for more than 15 years. She has written about various topics for newspapers, public relations, fundraising and social media, and enjoys brining her experiences to the readers at Indy with Kids. Rebeca’s experience as an autism parent also brings a unique perspective and inside knowledge for our team.

A Fire in Our Home