Fall is synonymous with Halloween, pumpkin spice, and all things cozy and spooky. If having the pants scared off of you is your idea of a true fall tradition, I have the perfect venue for you: Nightmare on Edgewood.

This haunted attraction is INTERACTIVE. Do you know what that means? Well, I had no idea this was a thing but apparently THEY TOUCH YOU! Yes, the ghouls, ghosts, clowns, and sadistic doctors in these haunted houses not only jump out at you, they touch you, talk to you, and sometimes even request to jump on a bed Let me be clear, Nightmare on Edgewood is not an attraction for the faint of heart. Nor is it an attraction for young children, pregnant women, or those with health conditions. Anyone with asthma, epilepsy, or heart conditions should check with their doctor before deciding to enter these attractions. While planning your trip please also be aware that smoke, strobe lights, and fog are used in this attraction. Also, did I mention it’s really freaking scary?

So let’s talk about the basics. People enter the houses in groups of 2-6. If you are in a bigger group you will likely have to break into smaller groups. This helps make the haunts extra super creepy. I loved this about Nightmare on Edgewood because we weren’t in the houses with other people and you didn’t have to wait behind others nor were we pushed on by anyone waiting on us. It seriously feels like you are on your own. In a really spooky location with no help in sight.

Cost for all three attractions is $25 general admission, and admission for all three attractions along with a fast pass is $35. If you go early in the evening or visit on a Thursday or Friday you are less likely to encounter long lines. Nightmare on Edgewood is open from September 20th through November 9th for the 2019 season. Check the calendar for open days and times. Anyone in line by closing time will be able to go through the haunts. Tickets can be purchased at the attraction or in advance on the website. There is no charge for parking. Also, please note that Nightmare on Edgewood has a new location this year which is, wait for it, not on Edgewood. The address is now 1927 S. Meridian Street, just south of downtown Indianapolis. Nightmare on Edgewood is generally open on rainy evenings, but call if you are unsure about the weather. While most of the attractions are indoors there are parts that are open air.

So you want to know about the attractions, right? Well, there are three haunted attractions, with a fourth haunted attraction in the works. Your general admission ticket grants you admission into all three of these houses, which lead from one into another with a small break in between. In case you need to slow your breathing or wipe away your nervous sweat or anything. In attraction one you will go through The Cabin. The very creepy (and very dead) Conley family lives in the cabin and upon entering you’ll seriously be wishing it were actually abandoned. So, good luck getting out of there. In part two you will be lead into the Edgewood Sanitarium. This particular haunt is something out of a horror movie or your most frightening dreams. Both the employees and the residents at this sanitarium will have you thinking that your next stop couldn’t be more frightening. If you think the third haunt can’t be any more terrifying than what you’ve seen you far you will quickly be proven wrong. The Dark Carnival has all of the clowns and creepy music your scare-loving heart could possibly desire, and don’t forget the disorienting spinning tunnel you must pass through to be able to exit. And in all of these haunts remember the thing I mentioned earlier? It’s interactive so…yeah, these ghouls are TOUCHING YOU!

Let’s talk about the they-can-touch-you thing a little bit. Honestly, I love haunted houses but this made me a little nervous. After going through I’ll say it for sure ups the creep factor (did I tell you that Nightmare on Edgewood has been voted the Scariest Haunt in Indiana for the past two years by The Scare Factor Reviews?!). The characters DO touch you. They jump out at you, they lure you, they hold on to you and push you towards other terrifying scenes and characters. The actors get in your face talk to you, and generally give you the creeps. However, if you want out of the haunt they will also be the ones to assist you, so all you have to do is ask. This was by far the most interactive and amazing haunt I have ever been to. I loved every terrifying minute of it and I can’t wait to go back. I was extremely impressed by the setup, the different scenes, the actors, and all of the effects. If a visit to a haunted house is your thing, don’t miss Nightmare on Edgewood. If the idea of a haunted house scares the poo out of you, then come prepared. Nightmare on Edgewood is super fun and super scary! 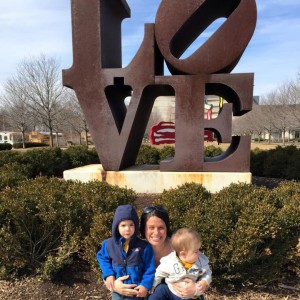 Jingle Rails: The Great Western Adventure at The Eiteljorg Museum