You Can Sleep Inside a Train Car in Downtown Indianapolis 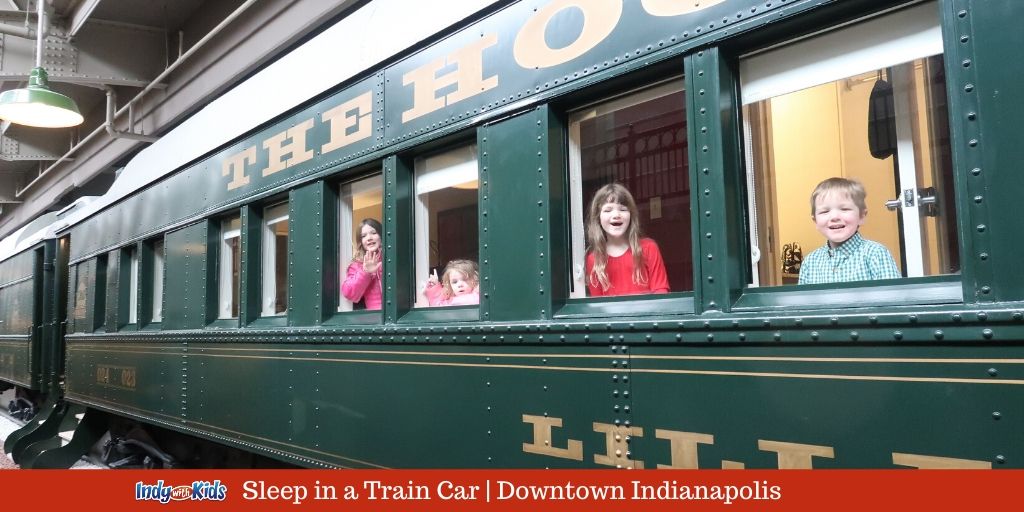 All Aboard! Did you know that there’s a hotel in downtown Indianapolis where you can sleep in a train car? I’ve been hearing rumors about this train hotel for years and I finally can tell you that this isn’t just a rumor, you CAN sleep in a train at this Indy hotel!

Union Station in Indianapolis was the first Union Station in the United States and it remains today as a working train station. Union Station is also home to the Crown Plaza Hotel where you can stay in a normal hotel room or you can check in to one of the authentic 1920’s Pullman Train Car guest rooms that are actually on the real train tracks that trains once traveled on. The rooms are named after people who were famous in the early 1900’s. There are also white statues throughout the hotel depicting people from the 1900’s, wearing clothing from the 1900’s. These are known as ghost travelers or ghost figures. You’ll see them trying to catch the train, pass them as you get on the elevator and see them as you wander the hotel. The hotel rooms inside of the train cars are cozy. We all know that trains aren’t the largest spaces and the hotel rooms aren’t either since you’ll actually be sleeping inside a train car. In my opinion they are the perfect size for a family of 2-4 people, but you can reserve an adjoining room if you have a large family.

The train car hotel rooms are available with two full beds or a single queen bed. You’ll also have a television on a dresser, a seating area with two chairs, a desk with a chair, a small bathroom with a bathtub/shower combo, a small coat closet and an area with a small fridge and Keurig machine. Each train has two rooms for a total of 26 train car rooms. The Crown Plaza Hotel at Union Station in Indianapolis has an indoor pool that’s great for relaxing and playing with friends. My kids loved the pool and could spend hours just playing around. Even though it’s a no frills pool, it’s located within the train shed of Indianapolis’ Union Station, which is pretty cool. Things to do Near the Crown Plaza Hotel

The Crown Plaza Hotel is located near the Indiana Convention Center and Georgia Street, two places where a lot of fun Indianapolis events take place. This train hotel is just a 10 minute or less walk to Monument Circle, Bankers Life Fieldhouse where you can see the Indiana Fever play, cheer for the Pacers or enjoy a concert or family friendly performance like Disney on Ice.

Things to do with Kids in Indianapolis

Only 15 minutes away from all of the White River State Parks attractions (Or 5 by car), you’re in the prime space to spend the day at the Indianapolis Zoo where your kids can have animal encounters and do things like, paint with elephants and dolphins. There are a lot of family friendly things to do along the canal, a visit to the Indiana State Museum is nearby and you’re just as close to the NCAA Hall of Fame. During the warmer months, you can enjoy a concert on the Lawn, rent a hammock to use at White River State Park and take your kids to an Indians Baseball game.

In addition, a fifteen minute walk or five minute drive will get you to the Indiana Historical Society where your kids can step inside historical moments and engage with actors who bring history alive.

The Crown Plaza Hotel is an awesome place for a family to stay if they love trains and want to sleep in a train car. There are plenty of other Indiana train activities nearby for train enthusiasts. A five minute walk will put you at the Old Spaghetti Factory where you can eat inside a trolley car.

Stay at the Crown Plaza during GenCon for a quick and easy walk to the nearby festivities and a touch of extra fun.

There are so many train and railroad activities in Indianapolis, pick one to try today! January 25, 2023
PrevSpring Break with Active Kids in Indianapolis
St. Louis with Kids: A Family Guide to the Perfect WeekendNext
Scroll to Top